Scientists exploring a deep ocean basin in search of species isolated for millions of years found marine life believed to be previously undiscovered, including a tentacled orange worm and an unusual black jellyfish.

The deepest part of the Celebes Sea is 16,500 feet. The team was able to explore to a depth of about 9,100 feet using a remotely operated camera.

The project involved the Woods Hole Oceanographic Institution and National Geographic Magazine in cooperation with the Philippine government, which also provided the exploration ship. Madin said the specimens they collected included several possibly newly discovered species. One was a sea cucumber that is nearly transparent which could swim by bending its elongated body. Another was a black jellyfish found near the sea floor.

The most striking creature found was a spiny orange-colored worm that had 10 tentacles like a squid, Madin said. "We don't know what it is ... it might be something new," he said.

In this photo above - released by the Woods Hole Oceanographic Institution (WHOI) and the National Geographic Society-led Inner Space Speciation Project (ISSP) - a deep sea jellyfish (Atolla sp.) collected with the ROV (Remotely Operated Vehicle), from a depth of at least 1,500 meters, at a briefing Tuesday, Oct. 16, 2007 aboard the Philippine research vessel BRP Prisbitero off Manila Bay in Manila, Philippines. A joint team of Filipino and American scientists that explored the Celebes Sea in southern Philippines early this month, announced the marine-life discoveries following their return from their voyage Tuesday. 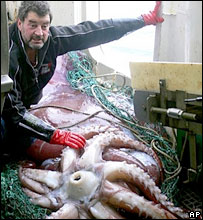 New Zealand fishermen have caught what is expected to be a world-record-breaking colossal squid.

Local news said the Mesonychoteuthis hamiltoni was about 10m (33ft) long, weighing an estimated 450kg (990lb), and was the first adult colossal squid landed intact, which could be the largest ever found. One expert said calamari rings made from it would be like tractor tyres.

Colossal squid, which are found deep in Antarctic waters, are thought to be about the same length as giant squid (Architeutis dux) but are much heavier. The species was first identified in 1925, but very few specimens have been found.

The first specimen recovered intact, a 150kg (330lb) immature female, was caught on the surface in the Ross Sea near the Antarctic coast in April 2003. The squid was frozen in the ship's hull and brought back to New Zealand for scientific examination.